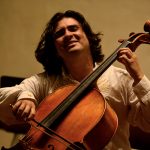 A multifaceted artist, cellist Diego Carneiro is one of the most distinguished Brazilian young artists and conductors of his generation. Winner of several prizes and international recognitions, he received commendation as the Ambassador of tourism of Ecuador, a recognition from the Majority of Quito, Camera of Commerce Ecuador-Brazil, Ministry of Foreign Affairs and Ministry of Education of Ecuador. He was recently accoladed by the United Nations in Geneva, for his musical work integrating several countries and initiatives with a human side. He has participated in several important programs for the BBC, Deutsche Welle, CNN and other media.  He was born in Belem, on the Amazon region, studied cello, piano, viola da gamba and orchestral conducting in the universities of MO Columbia (USA), Trinity College of Music (England) and the Haute Ecole de Musique (Switzerland), where he obtained his bachelor and master degrees. He has conducted some complementary studies in Clinical Hypnosis in the Hypnosis clinic in London, which is linked to the University of Thames Valley and Greenwich, with the purpose of exploring the relationship of music and the unconsciousness, applied to learning, performance and teaching.

Maestro Carneiro has performed as soloist and teacher in several international festivals, like London Promenade and the Royal Albert Hall -recorded for the BBC 3-, presented concert for the Suisse Romande Radio and participated in the documentary “The music of the Rain Forest” for the BBC 4. He also produced the documentaries “A cello in Kenya”, “Amazonia, the Resounding Jungle”, and “The Conference of Birds” which shows his studies in composition related to the singing of birds.  He won several international prizes and awards such as Solti Prize, the Tillett Trust, the Myra Hess Trust, the Leonardo Smith Duo Competition, the Barbirolli Award, ‘Solo Emerging Artist’ Competition, DucheD’acua Viva prize, among others. In 2006, he joined the ‘Live Music Now’ scheme created by Sir Yehudi Menuhim and has worked with other big artists like Bernard Greenhouse, David Geringas, ArtoNoras, Maud Tortelier, Leonid Gorokhov, Alexander Baillie, Antonio Meneses, Christopher Coin, Steven Isserlis, and more.

He has made concerts and masterclasses in Brazil, Mexico, Ecuador, Peru, Colombia, Cuba, Kenya, Honduras, the United States, countries in Europe and Scandinavia. He was the Director of the Program of Music in the University of the Cloister of Sor Juana, in the City of Mexico, and the Orchestra of the Summer Festival in London. He has worked with several universities, embassies and foundations in said countries, promoted the international festivals “Carneiro Cello Academy” in Brazil, “Summer music festival” in England, and in 2017, founded the Viola da Gamba Society of Ecuador.

Carneiro is frequently invited to several countries to give concerts, masterclasses, conferences in festivals and international cello congresses and others, such as Rio +20 in Rio de Janeiro, COP20 in Lima, World Water Forum in Brasilia, International Transpersonal Psychology Congress in Salvador de Bahía, several Rotarian Congresses and more. He is one of the invited teachers in the Biennale of Cellos in Lima, Cello Fest in Mexico, Rio Cello in Brazil and more.

In 2009, he founded a non-profit organization named Amazonartwhich brings together international artists for supporting educational and social projects in many different countries, mainly in the Andean and Amazon regions. Recently, he founded the Ecuador Youth Orchestra which is composed of young talented musicians who do not have opportunities to develop a music career. Carneiro wants to offer them opportunities similar to those he had, motivating them to pursue music qualities and humanitarian approach through cultural exchange.

In Brazil and countries in Europe, Carneiro has promoted several educational experiences and cultural exchanges with the Youth Orchestra of Ecuador and young Orchestras of Germany, such as the Musikshule Paul Hindemith Neuköln and Jugensinfonieorchester Schwerin. They also included concerts in Casa de América in Madrid, UN palace in Geneva, Saint German de l’Auxerrois in Parisas part of the Festival of Latin America and the Caribbean, Consulate of Ecuador in Netherlands and other cities of Germany, as part of their Tour of concerts “Pro-Ecuador”.

Through Maestro Diego’s efforts,the Youth Orchestra of Ecuador has birthed several initiatives including  “Music as a refugee”, “Ecuador+Music”, and “Among worlds”. He and the Orchestra were declared Ambassadors of Tourism of Ecuador by the Ministry of Ecuador. They have also been recognized by the Majority of Quito, Ministry of Foreign Affairs, UN, and have organized a concert in the borders of Ecuador-Colombia and Ecuador-Peru, to support refugees and migrants.