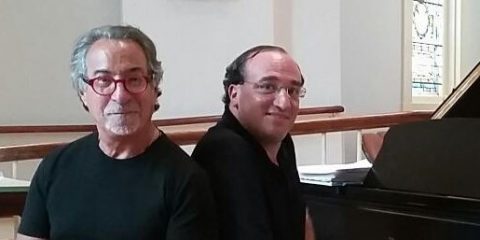 Philip Liston-Kraft and Daniel Weiser team up for another of their fantastic holiday programs featuring fun Christmas songs as well as great arrangements of Tchaikovsky's "Nutcracker Suite" and Gershwin's "Rhapsody in Blue."

The Weiser/Liston-Kraft Piano Duo has been described as “simply a force of pianistic energy” who play with “a seamless and tightly knit unity,” and who “absolutely smoke the 88 keys.” They have been bringing their captivating, virtuosic, and high energy performances to audiences across the U.S. for over ten years. Most certainly the only piano duo who both attended Harvard Law School, Weiser and Liston-Kraft bring a flair for the dramatic and a high-wire musical choreography that make their concerts a visual and sonic spectacle.

We return to the beautiful and historic Old South Church in downtown Windsor, VT.   A perfect space for an intimate concert.  Door admission is $20 for general, $15 for Church members, and free for children 18 and under.  Buy discounted seats in advance below with any major credit card.  You do not need to have a PayPal account.  Click on the yellow “Add to Cart” and you can buy multiple seats on the next screen.  To get the Church member price, click on the arrow below next to the admission price.

House Concert reservations are required and seating is limited.  Buy your seats below.  Click on the arrow to buy multiple seats.  All major credit cards are accepted and you do not need to have a PayPal account.  Delicious food and drink is included in the price.  Or you can call Marcia Colligan, President, at 603-643-3337 if you prefer to make a reservation over the phone and then send a check.

Another wonderful concert at our home Church with fantastic acoustics and a fantastic Steinway piano.  Tickets are available at the door or buy in advance below for 10% discount.   All major credit cards are accepted and you do not need to have a PayPal account.  Click on the yellow “Add to Cart” button and you can buy multiple seats on the next screen.  Click on the arrow next to the admission price to get the discounted  Church member price.  All children 18 and under are free.